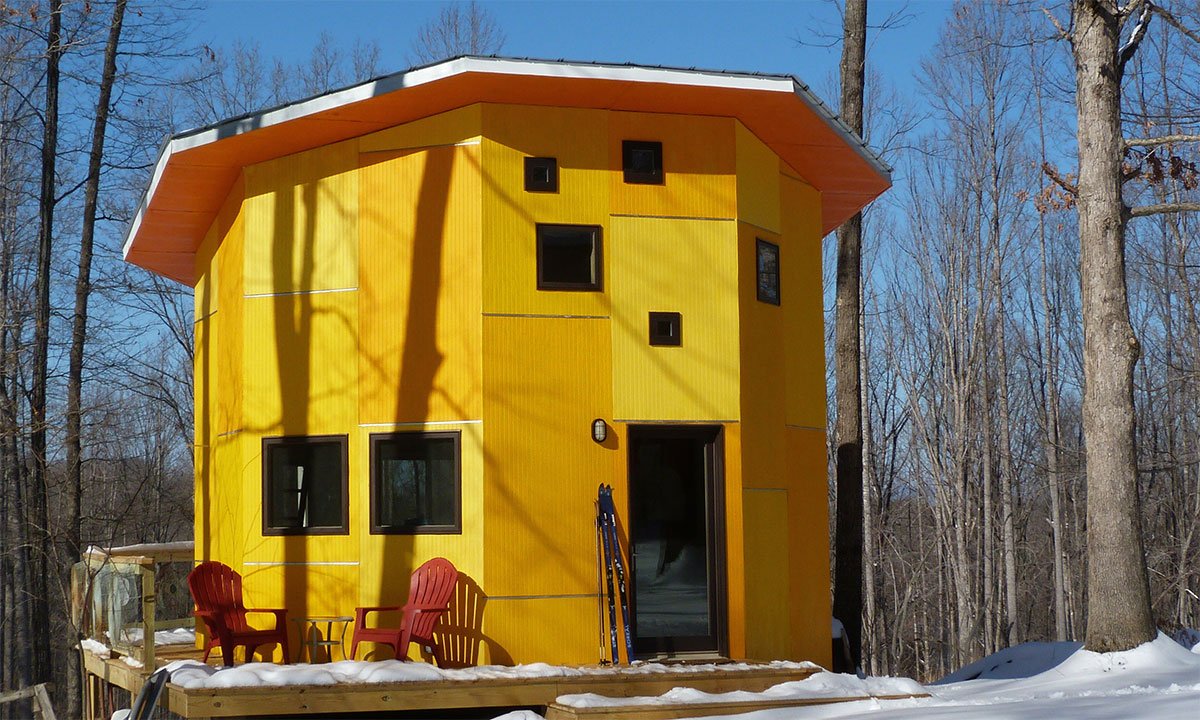 Article written by Erica Howsare and published in Cville Weekly.

There’s an enduring appeal to the idea of a compact dwelling that can go up fast—it’s been expressed in everything from the teepee to the mobile home. In the zeitgeist of the moment, it’s the phrase “tiny house” that holds currency. Down in Amherst County, sculptor Craig Pleasants has created his own version of the easy-to-build, inexpensive shelter. He calls it the Octagonal Living Unit.

Pleasants’ interest in small, eight-sided houses goes back to 1981, when he and his wife, Sheila, built an octagonal dwelling in North Carolina. It was just the two of them then. Constructed with a traditional “stick” frame, it wasn’t easy to build. “The angles made it difficult,” says Pleasants.

In other ways, though, the house was a big success—“remarkably airy-feeling,” he remembers. The octagonal shape made it feel bigger than it was, as did the generous number of windows and a high ceiling. The couple lived there for three years, comfortably. “It never felt crowded or claustrophobic,” he says—though it was less than 500 square feet in size.

Fast-forward to about a decade ago, when Pleasants learned about Virginia-made ThermaSteel panels—steel and polystyrene panels that arrive with door and window openings precut, ready to fasten together. They provide structure, insulation and vapor barrier all in one, and they come in a standard 4’x8′ size.

“I said, ‘This is the way to build this octagonal house and make it reproducible,’” says Pleasants. “I could engineer this house as a do-it-yourself kit.”

After a lot of experimenting, Pleasants arrived at a design that matched exactly the footprint of his original octagonal house: 20′ across, with each wall being 8′ in length. One big change was that the hip roof turned into a shed roof—meaning that “the upstairs is completely usable,” says Pleasants. The Octagonal Living Unit (OLU) has 300 square feet of downstairs space and a 150-square-foot loft upstairs: enough, Pleasants says, for a tiny bedroom and bathroom.

At $34,000, the kit includes all the wall and roof panels, doors and windows, Ply-Bead exterior siding and tin roofing, plus loft structure and hardware. Interior finishes are left to the buyer to provide. “It can be done very inexpensively or in a much more luxurious way,” Pleasants says.

Visit the prototype at the Pleasants’ home outside Amherst, and you’ll first be struck by the playful exterior, painted in various shades of yellow and enlivened by a jaunty arrangement of small windows on the second floor. Inside, it’s finished to reflect its purpose as an art studio: particleboard walls painted white and handsome maple flooring. Though it’s wired for a mini-split heater, Pleasants relies only on a small space heater, which in this energy-efficient structure is enough to keep things toasty.

Pleasants sees the OLU as embodying many possibilities—simple or swanky, vacation cottage or primary home. One could reach the loft with a ship’s ladder, spiral staircase or regular staircase.

The common denominator is that the OLU is easy to put up. “Three people can put this kit up in three weeks,” says Pleasants. Completing the prototype—including interior finishes—took 600 man-hours altogether.

Pleasants has spent years exploring the intersection of sculpture and architecture, building structures out of materials as diverse as cigarette cartons, secondhand shirts and morning glories. The OLU is an extension of his art practice. “I see it as a piece of sculpture that you live in,” he says.